I’ve spent the past month or so researching into the earls of Cornwall that inhabited that role from the Norman Conquest to the early years of the reign of Edward III in the 1300s. Undoubtedly the most unfortunate earl was that of Piers Gaveston who unexpectedly was given the earldom in 1308 due to his close relationship with the king Edward II. The relationship, however, was despised by many lords in the English kingdom and was a key reason for the outbreak of civil war. By 1312 Gaveston had been captured and was viciously executed, ending his brief association with Cornwall.

Generation after generation of historians have debated the truth behind the relationship of Edward and Gaveston: was it a homosexual liaison, or a close bond between brothers-in-arms? To be honest, it is not a debate that I’m particularly concerned about; it is the impact of their relationship on politics and society that is the most intriguing.

Whilst reading into articles about Gaveston (thankfully I have a log-in to History Today) I came across J.S. Hamilton’s piece from 1999 ‘Meage a Roi: Edward II and Piers Gaveston’; in it he references a painting by Marcus Stone from 1872. It is a wonderful image in that it displays the affection between king and earl, as well as the jealously of the other barons (including what could possibly be Edward’s queen, Isabella): 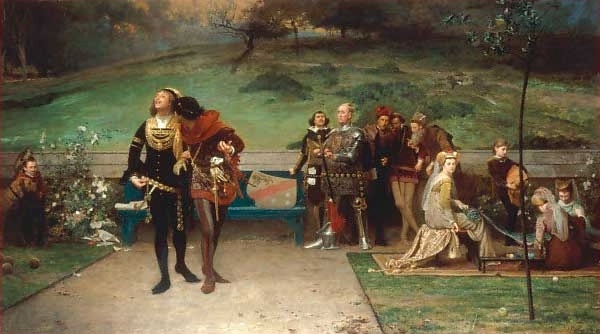 The death of Piers Gaveston wouldn’t end the instability of Edward’s rule: there would be another favourite, defeats against Scotland, and his ultimate removal by his fed-up and annoyed queen. All of this has meant that Edward II has gone down in history as one of England’s worst king’s, with possible rivals including King John and King Charles I. But it is an interesting period of history due to its chaotic nature, especially being sandwiched in-between two “strong” monarchies: Edward I and Edward III.

History in all shapes and sizes

Discover your next history book

a vision for an independent, Monastic-type order and dispersed community of Humanistic Christianity, based in north Cornwall

Books, writing, reading, words and images. I love them; do you?

Writing, the Universe and whatever occurs to me

Renaissance Chronicles
There and Safely Back Again

Celebrating history one afternoon tea at a time