Last week I spent a few hours walking on the coast-path between Broadsands and Brixham in south Devon. The main mission was to find a geocache that was located in a cave in a nearby quarry (yes, we found the container, but in the process I became muddied and my clothes were ripped!). Whilst on the way we passed through Elberry Cove and it was my first experience of coming across the ruins of the bathhouse there.

Standing three stories high, with the ground floor being flooded when the tide rose, the lord could swim into the sea through a gated doorway, preserving his dignity.

I particularly like the end words ‘preserving his dignity’. The Wikipedia page itself was unreferenced, but my whistle had been whetted: I needed to find out more of this Lord Churston and why maintaining his dignity was so important. 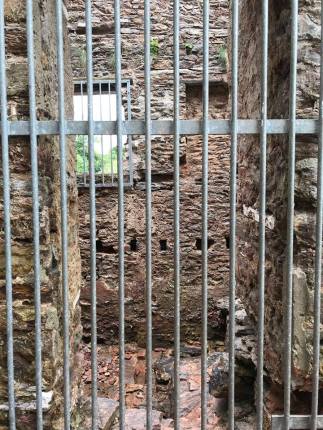 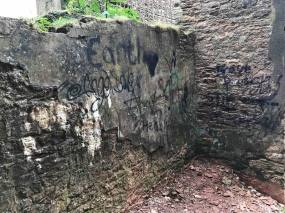 Luckily the bathhouse itself has been the focus of many other blog-posts (some very good, others not so good) which provided further light on its history. Furthermore, I was able to come across a small history on the bathhouse itself issued by the Devonshire Association between 1997-1999: ‘The Bathing House, Elberry Cove, Churston Ferrers’ (thank you Google!). The booklet provides a short history of Elberry Cove and how the Bullers acquired the land of Churston estate in the second half of the eighteenth century, from which time the bathhouse itself is stated to have been constructed. However, the booklet notes that various maps and publications made no specific reference of the bathhouse itself until a survey from 1839 (on the Churston parish tithe map). It is speculated that the bathhouse was built during the late 1700s-early 1800s when seawater bathing was in fashion, with the English having taken influence from continental Europe. The Bullers acquired the property – within the larger Churston estate – in the second half of the 18th century and clearly sought to emulate the peerage from across the country and take advantage of the spectacular setting of the bay.

The building was in use throughout the 19th and into the 20th centuries, with the various Bullers (who took the mantle of Lord Churston) utilising it as a family setting. One family member – Lydia, Duchess of Bedford, wrote of her experiences at Elberry Cove in the inter-war period in the first half of the 20th century:

‘It was the loveliest little dream place where we went for our picnics in the summer…. We always sunbathed on the actual rock and the flat bit leading to the sea. The chairs were in a little sprigged flower pattern (very faded) and always sparkingly clean!… We always wanted to be allowed to stay there… But we weren’t! As children we could not get down there quick enough. It was like a little magic place, all white washed walls and plain pretty things. Smelling of the sea and totally unforgettable.’

As for the Lord Churston mentioned in the Wikipedia article, well, it could be a pick of several. The first Buller to come into ownership of the land was Sir Francis Buller (1746-1800), who originally came from the notable Buller family of Cornwall. He was a respected local politician, serving as an MP for East Looe (back in the time of the “rotten boroughs” when East Looe and West Looe sent a total of 4 MPs to Westminster!) and as MP for Cornwall. He came into possession of Churston through his marriage with Sussan Yarde, heiress to the property. Their son – Sir Francis Yarde-Buller (1767-1833) – continued in his father’s footsteps of collecting more property, and his son John Yarde-Buller (1799-1871) was the lord in charge of the property during his pomp in the 19th century. I like to think that is this third one that is the Lord Churston who wanted his dignity respected; of course, I have no evidence for this but there is a fanciful thought of this Conservative MP swimming out into the bay with a curious eye roaming at any on-lookers.

Years later, now in ruins, the bathhouse still lives on in an odd sort of way. Passers-by – like myself – regularly scout out the location and are intrigued by its history and past uses, as well as those who frequent the spot to drink beer and cider out of sight of others (as observed by the various bottles and beer-cans in the bathhouse). This second use is probably not one that Lord Churston himself would have agreed with, but the location itself still lives on in the twenty-first-century.