With the blog surviving four months – far longer than my other doomed attempts (as outlined in my very first blog-post all the way back in April) – the site has now become filled with many different posts relating to several different topics covering over 30,000 words. All of this has made it an eclectic collection, which was probably the intention all along; it stresses the vast canvas of history that I encounter on a weekly basis as a lecturer and whilst researching. In order to comprehend all of this I thought I’d do an “About this blog” page, and to provide monthly round-ups of all the different posts. So, here goes the first round-up.

The start of July found me winding down in the college setting: A-levels were completed, the foundation degree was completed, the Access to HE programme was completed, and the academic year came to an end. As part of this process the college start to gear up to the next year starting in September 2018, and this includes the running of taster sessions to show-off our subjects and to give the potential new students a taste of what to expect. I decided to put together a blog-post on this – ‘Introducing History’ – to outline just how the heck a person is supposed to start off what history is all about.

Luckily we had the time to devote a whole day to the William of Orange Walk: our third year of running it as part of the History with English foundation degree at University Centre South Devon College. I was fairly cautious – at first – of discussing it on the blog due to the religious connections with King William III; however, our walk is one of its historical significance and connection to the south Devon area. In all, three of July’s post were connected to this: the write-up of the walk from this year, an overview of the past couple of years, and some photographs from the 2017 walk.

A lot of July was spent watching the 2018 World Cup, which probably explains why I spent a ridiculous amount of time reading through past results. I had an idea about why some countries were more successful than others, and this translated itself into research on the European Cup for club sides. The ultimate post was ‘The Big Eared Holy Grail: A Brief History of the European Cup’. It shows the clear contrast of the modern game (1990s onwards) to previous decades, with a handful of clubs now dominating the football scene. My biggest problem with this post was how to categorise it, and so I put it in a new box called History of All & Sundry (which won out over my initial idea of History of Misc… which didn’t seem too satisfactory to say or even look at on the page).

On 5th July I uploaded one of my old articles relating to local history (specifically to the St. Budeaux area in Plymouth, Devon). The post – ‘An Eccentric Vicar: Rev Thomas Alcock’ – provides a short biography of the life of the vicar of St. Budeaux Church in the 18th century. He was quite a character: he left many memorable words, clashed with other local churches, became a notable landowner, and engaged in a lengthy pamphlet war regarding cider. I originally wrote it back in 2008 whilst studying for my degree and I was incredibly pleased to see it published in The Devon Historian; especially on seeing my name positioned next to so many reputable others.

Furthermore, I also discussed the relationship between King Edward II and Piers Gaveston in the form of a wonderful painting (all of which relates to my current research on the earls of Cornwall). And the final post of the month relates to Elberry Cove Bathhouse, which I came across whilst on the coast path in Torbay. 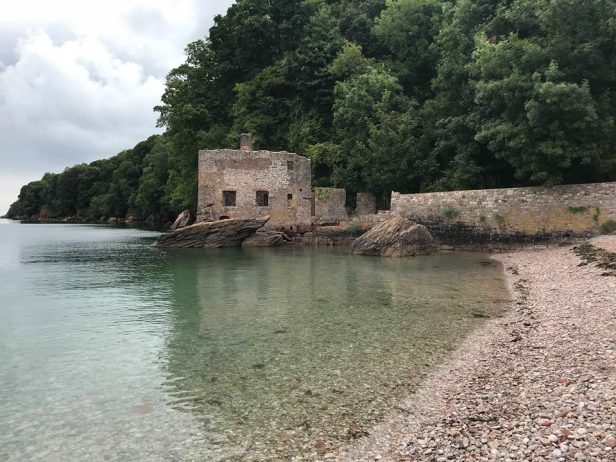 All in all, a good month’s blogging. I’m looking forward to typing up a few new ones based on the experiences of walking about over the past couple of weeks, and hopefully I will take advantage of August before returning to work recharged and ready for the new academic year.