Back in the delightful sunny days of the summer I spent an afternoon with my dog, Fred, in walking miles in the Devon countryside finding geocaches. Our mission for that day was a circular route to the east of Newton Abbot, a region that remained virgin territory for my geocaching adventures. It involved walking through lanes filled with flies, across a small river, and up several hills. Along the way I came across a small church, seemingly planted in the middle of nowhere.

This church is dedicated to Saint Blaise and is situated in a hamlet known as Haccombe. The building is picturesque and I gladly snapped it in several photographs. It seemed odd, plunked here next to a large building (Haccombe House), but with little else next to it. All of this suggested that there must be a story behind it.

On returning home I searched for Haccombe and came across its history, during which time it has been associated with such esteemed regional names as the Courtenays and the Carews. Its biggest claim to fame is that it is credited as being the smallest parish in England, which is believable when viewing the lone two buildings beside it (the manor house and parsonage).

The entry for Haccombe in White’s Devonshire Dictionary from 1850 states provides interesting detail from the mid-nineteenth century:

“HACCOMBE, 3 miles E. by S. of Newton Abbot, is a small parish, or extra-parochial liberty, in the detached part of Wonford Hundred, south of the estuary of the Teign. It contains only 14 inhabitants, 290 acres of land, and two houses. It is the seat and property of Sir Walter-Palk Carew, Bart., and has been held for many generations by his family, one of whom was created a baronet, in 1661. The present mansion, called Haccombe House, was built on the site of the ancient hall, about 45 years ago. It is a large plain building, standing in a well wooded lawn, at the bottom of a gradual descent, near the church, on the door of which two horse shoes were fastened, “in memory of one of the Carews, who won a wager of a manor of land, by swimming his horse a vast way into the sea, and back again.”

The mention of a mere ’14 inhabitants’ confirms the notion of the church serving the smallest parish in England. Wider reading also highlighted the church’s odd connection to the wider Church of England: it isn’t directly linked to the next step within the church hierarchy (the Bishopric of Exeter in the westcountry) but rather directly to Canterbury due to the details of its founding in the past. 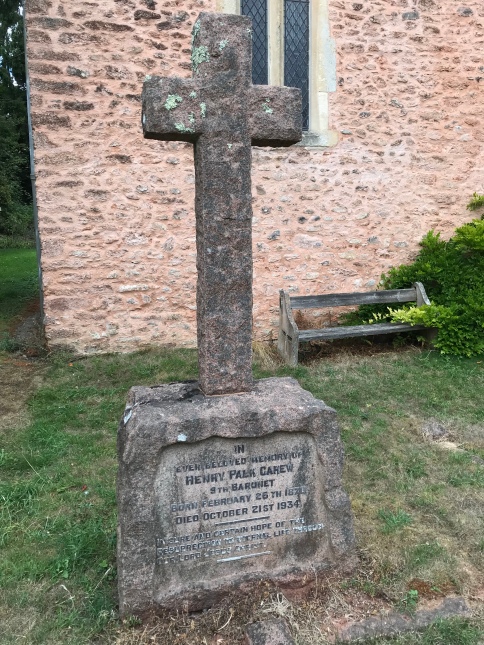 I hope to return to the church again in the near future for another walk to combat the flies, the hills, and the rivers. There are many questions that seem to tease me: the origins of the church, how other locals perceived it, and the names of those on the headstones in the churchyard. Hopefully the new year will provide an opportunity or two.