Back in 2006 I was at the beginning of my degree study and at the first stage in my understanding of local history. I wanted to go a step further in actually researching and writing an article for publication and for some reason (perhaps because of the oddity of Cornwall competing in the Olympic Games!) I wrote an article about the rugby player Bert Solomon. This was kindly published in The Cornish Banner in 2006, thereby making it my first article put on the printed page. I’ve reproduced it here for the blog; it remains an interesting small snippet of Cornish cultural history, and all these years later I’ve retained a special affection for Bert Solomon.

A question: Who was the greatest rugby player to have set foot on the green grass of Cornwall? Answers that many could roll names straight off the tongue. Cornwall, proudly and thankfully, has many favourite sons to boast. Though one answer appears more likely than not: Bert Solomon.

Called the Cornishman’s ‘flame of inspiration’, Solomon played a major role in bringing the County Championship title to Cornwall for the first time, almost 100 years ago, back in 1908. He has been described as ‘a totally enigmatic and wayward fellow, with all the failings and strengths that are the delight and despair of those who vainly try to comprehend the Cornish’ (Salmon, 1983,p.6). He was one of the best of his day, not only in Cornwall, but also throughout England – and he ended 1908 rubbing shoulders with players on the stage of the world.

The road to the final began in November 1907 with a visit to Taunton, Somerset, where the Cornish beat their hosts 25-6. However, hopes of lifting the trophy were seemingly derailed by a dispirited 8-17 defeat to their Devonshire rivals, held in Plymouth in December.

Come the New Year the Cornish needed a win against Gloucestershire, their last group opponents. Held in Redruth, their first home tie, they romped to a delightful 34-10 win. The result meant that Cornwall, Devon and Gloucestershire finished tied on points. A play-off between the three was undertaken throughout February to decide who had the right to progress through to the next phase.

Cornwall fought the men from across the border first, erasing their earlier defeat, by beating Devon 21-3 in Redruth, with Bert Solomon, ‘the master of the dummy pass, scoring a classic try’. A week later they travelled to Gloucester without Solomon who was injured, where they won in a struggle, 15-3. Cornwall were through to the semi-finals with a meeting against Middlesex.

Held in Redruth on March 12, the home side earned a 19-3 win and a pass through to the final itself, though ‘the encounter was closer than the score suggests’, with Middlesex under-strengthened for the game. The final was to be held later that month against a similar mining community, Durham County – ‘one of tin the other of coal’. 17,000 packed into the stadium at Redruth, ‘when 15,000 would have been less than comfortable’. They flocked forward, from all corners of Cornwall, to watch the golden generation of Cornish rugby lift the County Championship for the first time in their history. 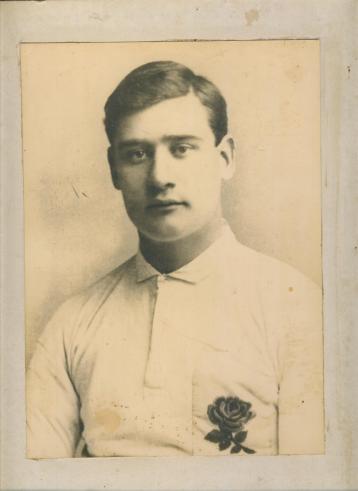 Solomon was the main inspiration in the 17-3 victory, playing ‘one of the greatest games he had ever played in the whole of his exciting career’ (Salmon, 1983, p.7). He got the first points, ‘a racing try near the left corner flag’ (Salmon, 1983, p.7), and sealed the result in the second half when on taking a pass and with 3 men upon him he managed to outwit them to get the try. The home side won and Cornwall cheered Solomon their hero. The headlines the following day read: Cornwall Champions of England! Cornwall would reach the Championship final again in 1909, 1928, 1958, 1969 and 1989, but would have to wait until 1991, 86 years, before winning it again. 1908 was truly a golden year for Cornwall, and the celebrations did not end on the field at Redruth on March 28, but instead continued all the way to the Olympic Games, held in London that autumn.

As champions of all-England, Cornwall were asked to represent England in the Olympic rugby tournament. Two other countries entered – Australia and France, with the French withdrawing before the Games begun. The might of Australia were on tour of Europe before the tournament kicked off, meeting their Olympic opponents, Cornwall, 3 weeks before their official game in a friendly meeting at Camborne. In the heat of summer 10,000 watched the game, as the County Champions were soundly beaten 18-5 to superior opposition. The prospects of finishing with the gold of the globe did not look good.

The final was held at White City in October 1908. The Australians played with full confidence and frenzy, as they managed to beat their earlier score, winning 32-3. Cornwall’s lone try coming from the giant of Solomon. The players were given ‘an Olympic cap of red and white, and an Olympic Silver medal’ (Salmon, 1983, p.11). The medal was drawn for by the players and won by “Chicky” Wedge, with the medal later being on show at the St. Ives Clubhouse. Yet more than the result the significance of the game itself confirmed that ‘Cornwall was rather more than just an afterthought sticking into the Atlantic’ (Salmon, 1983, p.1). 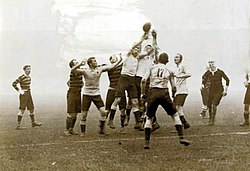 And what of Bert Solomon? He would make 26 county appearances for Cornwall, the last coming in 1909. Despite his contribution to this golden year of Cornish rugby he remains out of the pages of many books on history. Yet his name conjures up both mystery and genius to those in the know. It is true that he played for England, although just the once, in 1910, when he helped beat Wales. Yet it appears he refused other internationals and offers to turn professional and head further north (indeed, he declined an invitation to tour with an Anglo/Welsh team to Australia and New Zealand in 1908, though 3 of this Cornish teammates travelled). This mystery en-wrapped the playwright and rugby enthusiast, D.M. Thomas, to write a play (Hellfire Corner) centred on Solomon, where it charts his exploits with the Cornish team. It follows him ‘securing a crucial try for England in the match against Wales’, after which shows him to ‘abruptly leave the game to never return’.

Many explanations have been given in the past 100 years to find a reason as to why Solomon bore reluctance to play for England again. The main thread is that he was a private person, and as a thorough Cornishman he felt out of place, almost a foreigner, when outside his Duchy. He perhaps cared more about his racing pigeons than the game he was so skilled at! Apparently he found London an ‘overwhelming place’ (Salmon, 1983, p.106) and was ‘so embarrassed by banquets and functions which followed international matches that rather than sit at table with University and professional men, he would never attend lest he made a fool of himself’ (Salmon, 1983, p.106). If the above is true then both the history of rugby and Cornwall are all the more poorer for it.

Bert Solomon remains a legend. It is his unassuming nature, fiercely Cornish in character, that perhaps is the biggest draw to his name. Legend has it that when asked on England duty how he liked his passes ‘he replied – “Just throw the ball, boy, and I’ll catch ‘um”’ (Salmon, 1983).

3 thoughts on “Bert Solomon: A Cornish Flame of Inspiration”