The last post in this series saw England pitted against Spain in the Anglo-Spanish War of 1585-1604. Despite Spanish dominance, the war ended in a stalemate and a peace settlement was only reached after the deaths of Queen Elizabeth and King Philip. In today’s post we fast forward to the 18th Century when both England – now standing as Great Britain – came into conflict once more with Spain.

The War of Jenkins’ Ear arguably has the distinction of being one the most ridiculously titled wars in human history. Due to the escalation of the conflict and the breakdown of order in Europe the war became engulfed by the much grander sounded War of Austrian Succession. However, neither that title nor the Spanish title of Guerra del Asiento beats the mere mention of the surname ‘Jenkins’.

The British and the Spanish had a long history of conflict stretching back to the Tudor period. However, back then there was no unified political state of Great Britain but rather the smaller separate entities of England and Scotland. The unification came in stages, first with the accession of the Stuart king James I in 1603, and then later with the 1707 Act of Union. By the 1700s this newly confident nation had become a world power, controlling land all across the globe. The Spanish situation clearly contrasted the British rise: their once mighty empire of the 17th Century had slowly fallen on harder times and by the middle of the 1700s it was creaking at the joints. Both were continually wary of one another due to their possessions in the New World in the Americas. 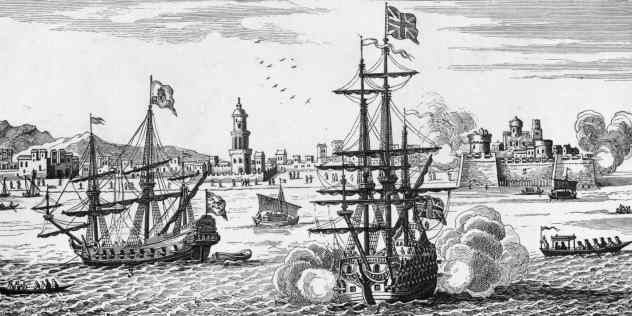 The causes of the war remain slightly obscure, both to modern day readers as well as contemporaries. The ear in question belonged to Robert Jenkins, a captain of a British merchant ship. Years before the outbreak of the conflict Jenkins’ ship was boarded by Spanish forces whilst off the coast of Florida (then in Spanish hands). Jenkins was accused of smuggling; his punishment resulted in the severing of an ear from his head. This led to an outcry in the British press, with the ear – reputedly – being paraded before parliament back home in London.

The incident of Jenkins became a rallying cry during the wider escalation and disputes over colonial territories in the New World; the name was symbolic of Spanish aggression and highlighted the perceived wrongs committed against the British. In 1739 the two empires came head-to-head in the Americas, particularly in terms of expansion in the Caribbean.  War was waged for a decade from 1739 to 1748, although in reality it had stalled mostly by 1742. Similar to previous conflicts between the two states, this was a war waged at sea. The few attempts made to land soldiers to take colonial soil generally ended in failure: the British attempted a botched invasion of Spanish-held Florida, whilst the Spanish were forced away from the colony of Georgia.

1742 was a key year in that the war became merged with the wider and more resounding War of Austria Succession. That war’s conclusion with the Treaty of Aix-la-Chapelle in 1748 also served as the official end of the War of Jenkins’ Ear. The end stalemate highlights how both nations were unable to take the advantage to claim an outright victory. Although we could argue that the war was ultimately fruitless, it does provide an interesting snapshot at the transition of both empires: the British would continue to expand (most impressively with the soon-to-be-held Seven Years’ War), whilst the Spanish would continue to decline.