Since returning to AQA for the German 1918-1945 module I’ve been delighted in having more time in covering topics and the ability to delve into deeper debates. The OCR module equivalent – Germany 1918-1963 – was packed with so much detail that it meant students simply whizzed by the key dates and didn’t properly engage (for example, the Holocaust was covered in one page in the recommended textbook!). I fully realised this striking difference when referring back to the old teaching resources (such as PowerPoints) from the OCR spec: in retrospect, they offered flimsy overviews of entire periods of history. My one lone PowerPoint on the “Golden Age” of the Weimar period has now been replaced by several, much beefier PowerPoints that outline more of the key issues.

More time = more opportunity. This simple formula has provided me with more room to try out a few different things; as well as the masses of content I’ve tried to be more visual with how I present the material (which has led me to creating history memes, but more on that in a later post). The topic of the cultural developments in the “Golden Age” (1924-28) allowed me another chance to try something different: a mock art gallery where each of the learners inhabited a random role (a right-winger, a socialite, or perhaps a farmer) to see how they would respond to the art work presented to them. 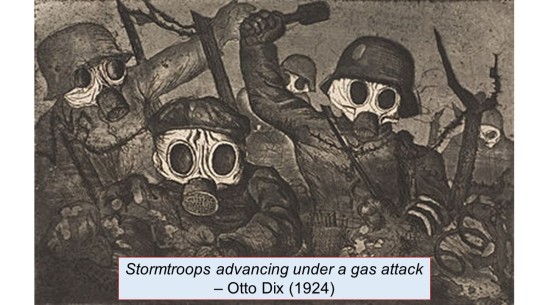 So, why is the Weimar Republic so often returned to with regards to cultural achievements? Quite simply because it was a hub of activity during the 1920s. American journalist, William Shirer, described his first impressions of Germany during this era:

‘I was stationed in Paris and occasionally in London at that time, and fascinating though those capitals were…they paled a little when one came to Berlin and Munich.

A wonderful ferment was working in Germany. Life seemed more free, more modern, more exciting than in any place I had ever seen. Nowhere else did the arts or the intellectual life so lively. In contemporary writing, painting, architecture, in music and drama, there were newer currents and fine talents.

And everywhere there was an accent on youth… They were a healthy, carefree, sun-worshipping lot, and they were filled with an enormous zest for living life to the full and in complete freedom.

The old oppressive Prussian spirit seemed to be dead and buried. Most Germans one met – politicians, writers, editors, artists, professors, students, businessmen, labour leaders – struck you as being democratic, liberal, even pacifist.’

Such innovation can be evidenced in different artistic fields: 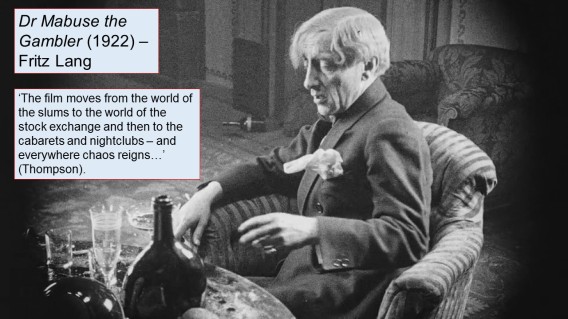 Furthermore, this influence can be felt in other fields, such as that of education. The 1920s was a fertile ground for intellectuals, with universities welcoming different voices from various political positions. The philosophical ‘Frankfurt School’ were in operation, whilst the curious Institut fur Sexualwissenschaft (Institute for Sexology) was founded; this is without mentioning the scientific advances with the likes of Einstein. All of this demonstrates a clear culture of forward-thinking progress.

Of course, not everyone was in agreement. When the Nazis came to power in 1933 they set out to destroy this spirit of cultural experimentation by running artists out of the country (or underground) and by promoting their own ideas of what art should be. Goering has the infamous quote attributed to him which highlights the Nazi position: ‘Whenever I hear the word culture, I reach for my revolver.’

Perhaps the more interesting debate on Weimar culture centres as to why it happened in the 1920s: what were the chief causes? Weitz has outlined his own interpretation of this:

‘…cabaret smut, jazz, expressionist cinema, sex manuals…all had their roots in the dual sensibility of the vast destructiveness of war and the powerful creativity of revolution’. 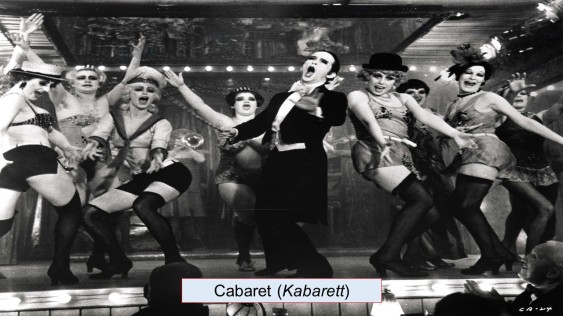 The Weitz interpretation is an intriguing one: political and social change from the 1918 revolution created the platform for new, fresh, dangerous ideas. Therefore political fragmentation – even the extremist coups in the early years – was necessary in order to provide opportunity to inspire artists and creators. Furthermore, we could push this further: the destruction of the First World War and the misery of the post-war years (putsches, hyperinflation, uncertainty) compelled Germans to indulge in immediate pleasure, rather than delay their gratification. For example, why bother saving your money all of your life when these savings can be wiped out by the poor choices of the government (as happened in 1923 with hyperinflation).

So, what is the best way to cover all of this material? I’m still in debate regarding this, but this year I decided to put up images of the pieces of artwork around the room to mimic a make-shift “art gallery.” Then, the students had to randomly pick up a character card, and this would provide them with a personality/view-point on which to consider the art. This was an opportunity to become creative with German names (Hermann and Fritz, of course) as well as to put in a wider selection of Weimar society. 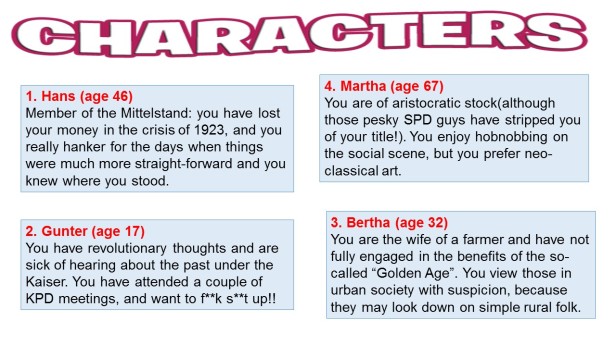 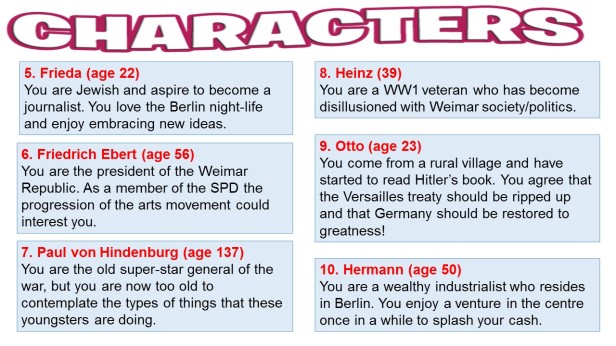 In honesty, there was varying success with this activity. All engaged – at varying levels – and all were able to reflect on their character and how they would respond to the art presented. Perhaps more of an art-gallery feel was needed (wine and canapes, perhaps?). Perhaps I could have invested more time in the activity and provided them with more opportunity to reflect? Whatever the solution here I’m happy that we completed this activity, and I hope to repeat it to perfect it further in future years.

Adventures of a Tudor Nerd