One of the great perks of the summer break is to read and research into areas of interest. I’ve been more productive than usual during this break, with with completing a couple of articles, finishing off the draft of The Entire History of One English Pub, as well as uploading a small Kindle eBook (Ralph Wilford: Henry VII’s Forgotten Pretender). One of the articles in question focused on Cuthbert Mayne, and it has recently been made available online by The Cornish Banner (click on the link here to read it in full).

Cuthbert Mayne is an intriguing character: he was a Catholic missionary who secretly re-entered the English kindgom during Elizabeth’s reign with the aim of attempting to keep his religion alive. The 1570s – the period of his activity – was a desperate time for English Catholics, with increasing levels of restrictive legislation and the fear that Protestantism would wipe them out. Mayne took refuge in the far-tip of the kingdom, in Cornwall, and was protected by a local influential landowner, Francis Tregian. However, both were caught, and it led to Mayne’s execution in Launceston in 1577 in what historians describe as a bloody scene.

There were a couple of reasons as to why I wrote this article: the Tudor period is one that I teach and consistently delve into on a monthly basis (as you could probably tell from the volume of posts on this blog). The Elizabethan period is a rich one filled with dramatic incidents with twists and turns, particularly regarding the religious situation. We teach how Elizabeth passed the so-called ‘Elizabethan Settlement’ in an attempt to stop the big divides between Catholics and Protestants; and, for a while, it seemed to work. But as her reign progressed the divide widened, eventually leading to Catholics attempting to murder the Queen and to infiltrate the kingdom in order to keep the flame of Catholicism burning alive (as a side-note, I have previously posted about the years of change between 1568-1572 which proved instrumental in defining Elizabeth’s reign). Mayne’s arrival in England in the mid-1570s was during a time of growing tension, and his capture and murder was something of a watershed moment for Elizabeth.

However, the whole incident of Mayne’s capture and execution also connected for other reasons, notably the local dimension. Mayne was executed in Launceston in Cornwall (again, Cornish history is another large feature of the blog), which provided an opportunity to consider the region in the wider context of the Tudor period. Furthermore, Mayne’s name has been taken for the title of a secondary school in Torbay, something that always piqued my interest. 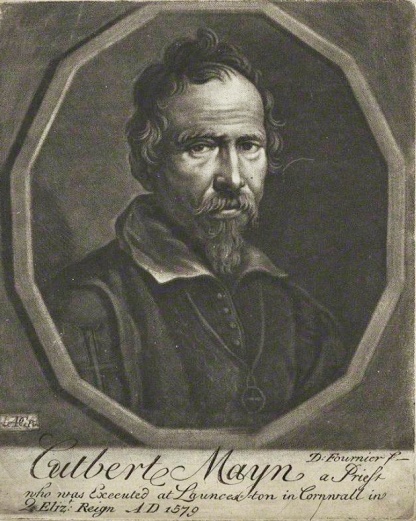 The article itself provides an overview of the religious context as well as a narrative of Mayne’s life, capture and execution. It then assesses what are the key talking points of the entire episode, which I managed to break down into four questions:

All of this can be read on The Cornish Banner’s new wonderful website; it provides a treasure-trove of engaging articles on a variety of aspects of Cornish history. Furthermore, you can read the article on Cuthbert Mayne in full by clicking on this link.

3 thoughts on “The Execution of Cuthbert Mayne”