Earlier today in a Politics class I listened to a variety of student presentations regarding the historical change in Britain of the extension of the franchise to vote. There were presentations on the 1832 Reform Act (a particular favourite act on which I focused my dissertation), the suffragists and suffragettes, as well as the 20th Century acts in 1918, 1928, and 1969 that established full democracy in the UK.

I particularly enjoyed the presentations for the questions that were thrown up and discussed:

The class are a great joy to be with, mostly because they feedback with different ideas and opinions. And it is one of these that made me reflect a little longer than usual (and which ultimately found its way onto this blog in this post). It relates to the question as to why women were given the vote in 1918. The old historical debate polarises around two views: the first is that the vote was given as reward for the war effort, whereas the second suggests that the vote was inevitable due to the pre-war campaigns (of both suffragists and suffragettes).

My own perspective has shifted over the years: from the first to the second. Despite the significance of the First World War as being a “game-changer” I didn’t want to avoid giving credence to the actions of the pre-war campaigners. “Deeds not words,” was the clarion call of the suffragettes, and to dismiss their struggle feels as if to do them a great injustice. 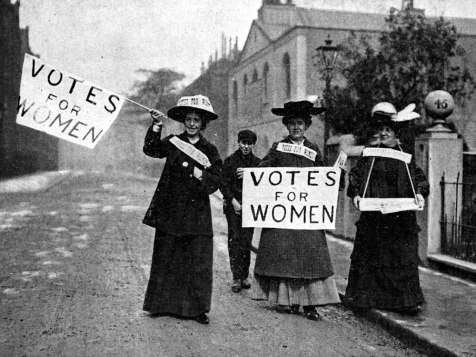 However, earlier today when discussing which had the biggest impact one of the students (Charlotte) brought up an interest fact; this related to the year in which Switzerland extended the franchise to women. Shockingly, it occurred relatively late in western society: in 1971 (with one canton only granting the vote on local issues in 1991!). I had heard of this fact before, but this student developed the point further when mentioning how Switzerland never experienced world wars, as Britain and many other western democracies did.

So, during the First World War and Second World War the country of Switzerland remained neutral. This provides an interesting comparison with Britain: both western states and yet each extended the franchise to women in different periods in the 20th Century. Was war, then, the reason for this comparative delay in Switzerland?

Obviously one factor alone – war – is not enough for us to clearly conclude the question, but it does help build more of a theory. Either way, I quite enjoyed considering the comparison and will develop this further with a bit of reading over the week ahead.

2 thoughts on “Women and the Vote: What’s the Deal with Switzerland?”